I have to do it.  I have to write about Corporal Cirillo.  Emotions are still running high, and I need to get mine out there too.  To share is to mourn is to heal.

“Shots on Parliament Hill.  They shot a soldier and are still at large,” my husband’s text said on Wednesday morning.  I texted back some expletives of disbelief as I ran around with my two-year-old, doing errands, going to the park, making lunch.  I didn’t turn on the TV/radio/internet because I wanted to keep my presence of mind on her, rather than on the awfulness in the world outside our bubble.  News reports like these tend to take hold of my psyche, to become my obsession, to magnify my senses.  I was just heading to a University class when Columbine happened, just heading to work when 9/11 happened, just heading to the playground when this happened.  I shut off my Twitter, closed my Facebook, and played with my child.  I insulated myself in my balloon of peace and happiness and possibility until naptime.  And then I turned on the TV.

As the hours unfolded and the media images came fast and furious, I could think of little else.  At work, I talked to every patient about the day’s events.  I emailed every Ottawa friend I have.  At night, my husband and I hunkered down on our couch and flipped between CBC and CNN and Social Media.  I took it all in, in an attempt to make some sense out of senseless.  To build some comfort out of discomfort.  To pull some hope out of fear.

Then on Friday evening, as I was heading home, I stopped to watch Cpl. Cirillo’s procession pass through Burlington.  Brant Street had been blocked off to a single lane, with a firetruck and police cars providing a gentle barricade between pedestrians and vehicles on the overpass.  The sun had nearly set, and hundreds of people were gathered, faintly waving flags and scanning the oncoming highway through the darkening skies and the end-of-rush-hour traffic.  Soon, flashing lights crested the dusk of the 407’s hill; a police motorcycle, and then a handful of police cars silently flashing their red-and-blues, surrounding the hearse.  Silence.  No car horns, no cheers, only a few claps.  Lots of tears, lots of drawn breath, lots of hugs.  The motorcade passed quickly beneath us, on the final leg of its journey to Hamilton.  And we all walked away.  Silence.

When I got home, I saw the pictures of the thousands upon thousands of Canadians who had the same experience I did, lining the Highway of Heroes like a heartbroken Honour Guard.  I’m glad I was there.  I needed to be there.  To represent my family, my gratitude, my emotions.  To mourn, to think, to reflect on what a united country we live in, our True North Strong and Free.  On what a profound impact Cpl. Cirillo has had on Canadians as a whole.  On the grief, the sadness, the dismay, the shock.

From far and wide, O Canada, we stand on guard for thee. 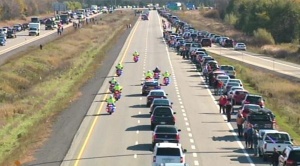 *** I’ve read a lot about how Corporal Cirillo’s death has received more press than Warrant Officer Vincent’s tragic death earlier in the week.  And while that’s true, it’s not a contest, and it doesn’t minimize Vincent’s service or his sacrifice. He died as a solider, because he was a soldier, in spite of being a soldier. RIP to both, and to all the soldiers we’ve lost before them. ***

The obvious choice for a blog topic this week is the Olympics.  With every blogger in cyberspace writing about the athlete’s behind-the-scenes, or medal counts, or the Canadian Olympic program development, I need to admit to something: I cried when I saw Hayley Wickenheiser carrying the flag as Team Canada entered Olympic Stadium.

Now I am emotional by nature, “dramatic” some may say, and that trait has only increased with age.  Somehow that moment, those images, really grabbed hold of me and choked me up.  I was sitting with my two young children, having lunch and watching the Opening Ceremonies.  February 7th was circled on our calendar with great anticipation, and I had already told my kids about Olympic competition and showed them where Russia was on the map (“Mom, Russia is the biggest country and Canada is the second biggest, I saw it on Grandpa’s map already” said my five-year-old.  Ahem, well excuse me.).  So when the Parade of Athletes began, we already had our Canadian flags ready to go.  And then Hayley walked in waving the red and white.

What is it about the power of sport that brings out such emotion?  Is it the memories of spending childhood Winters in the arena and Summers at the golf course?  Is it the feelings of teamwork, sportsmanship, and togetherness that I’ve felt throughout my life in all aspects of sport?  Is it the fact that I’ve found my spouse, my career, and my passions all directly or indirectly through sport?

Maybe it’s all of those things.   Maybe it’s none.  Maybe it’s just good ol’ Canadian pride.  Whatever it is, it makes me cry.  Don’t sit next to me to watch the Closing Ceremonies.  I’ll be even worse. 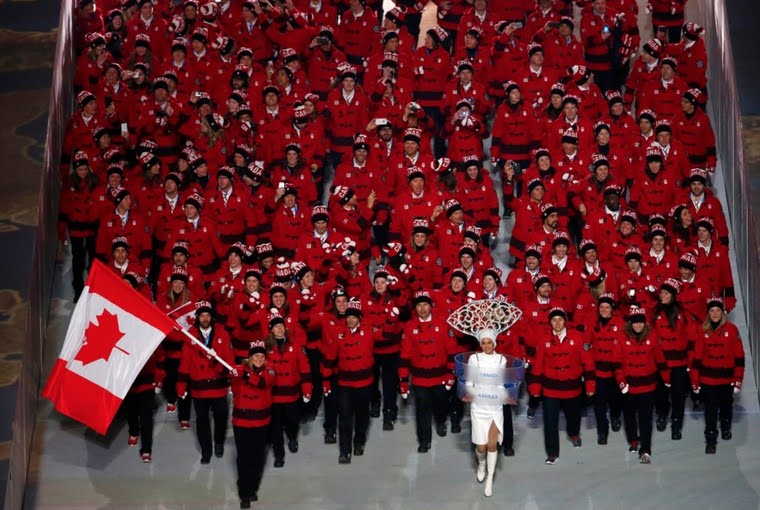 ***You can see the influence of sport happening early in our house here,
as evidenced by my 1-year-old’s lunch-covered ramblings.***