Today is my wedding anniversary.  I’ve been married eight years, and it feels like a lifetime and only a minute all rolled into one. 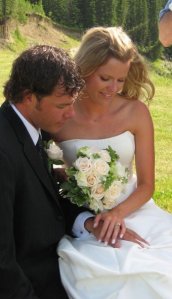 The traditional anniversary gift for eight years is pottery or bronze.  Instead, we got our kitchen backsplash tiled.  Point being… life happens, priorities shift, reality changes.  Our reality is two small kids, two jobs, a house, and a busy life.  And there’s love.  Lots and lots of love.

We went out for dinner this weekend to celebrate, as we do in and around every July 15th, and talked about how much has changed for us in the last eight years.  Some changes big, some changes small, some changes awful, some changes amazing.  All changes, nonetheless.  How is it possible that our lives can look so differently now, after less than a decade?

We were married on a beautiful cliff just outside of my hometown in Sundre, Alberta, overlooking the Rocky mountains and the Red Deer river below.  At our wedding ceremony, our minister spoke about how a marriage is like a river- always changing, sometimes surging, sometimes receding.  As long as the streams feeding the river continue to end up together, the river will continue to flourish.  How true that has been.

My husband and I met on a blind date, and were engaged less than a year later; we went from love-at-first-sight to fairytale romance very quickly.  Recently, I found an excerpt from a poem he gave to me soon after we met, when we were caught up in the romance and adventure of our new head-over-heels relationship:

After A While (Veronica Shoftshall, 1971)

After a while you learn the subtle difference between holding a hand and chaining a soul.

And you begin to learn that kisses aren’t contracts and presents aren’t promises.

And you begin to accept your defeats with your head up and your eyes open.

With the grace of an adult, not the grief of a child.

And you learn to build all your roads on today because tomorrow’s ground it too uncertain for plans.

After a while you learn than even sunshine burns if you get too much.

So plant your own garden and decorate your own soul instead of waiting for someone to bring you flowers.

And you learn that you really can endure.

That you really are strong,

And that you really do have worth.