The world lost a fighter on Sunday.

That fighter’s name was Jen Young, or JY, as she’s known.  She was a member of Crossfit Altitude, the gym I’ve been a part of for more than five years; if you know anything about CrossFit, you’ll know that we’re a tight-knit bunch.  And while JY and I weren’t close friends, I have certainly admired the battle she’s waged over the past year and a half.  In her case, the cancer began as cervical cancer and metastasized to her liver.  She was 31 years old.

I’ve written about her a couple of times here and there, but now I’m going to share her education and advice, in her own remarkable, touching, transparently honest words, courtesy of her blog ‘From Potato to Paleo.’

How she was initially diagnosed:

“One of the first things people seem to ask me is how I found out. Since cervical cancer is one of the most preventable and can often be detected earlier than most, I don’t mind sharing. In May I went for my regular annual physical, and the doctor did not see anything abnormal. I did not get a pap at this time, because paps are only every 3 years now and I had had a normal one the year before. In principle, I am very much against this change in policy, but my particular cancer tends not to show up in paps in the pre-cancerous “abnormal cell” stage like many others do, so it likely would not have made a difference in my case. In June/July I noticed bleeding outside of my cycle that seemed different. I went to the doctor again in August and asked for a pap and exam. She could see the tumor, and sent me to the gynocologist right away for a biopsy. The gynocologist took one, but was convinced it was just a fibroid given its rapid appearance; most cervical cancers grow much more slowly than my mutant variety (aren’t I just the overachiever). Obviously she was incorrect, although I’m not in the least bit upset with her. I would rather have spent that week believing it was no big deal than all stressed about it waiting for results.”

Her take on fear and inspiration:

“I’m not inspiring. I’m just terrified, and too proud to show it…. That said, you needn’t feel bad every time you talk to me about some aspect of life, yours or mine, that is not cancer related. Just because you didn’t feel terrified at any point today doesn’t mean that you don’t have problems. Having cancer didn’t make me suddenly immune to “ordinary” problems. I still get unreasonably angry at old people in parking lots and irritable with poor customer service. Problems are relative in the life experience, and I am not judging yours.”

“1b.  Do things that make other people smile”.

Lastly, have a read of this image that’s been floating around the internet.  “It cannot conquer the spirit“. 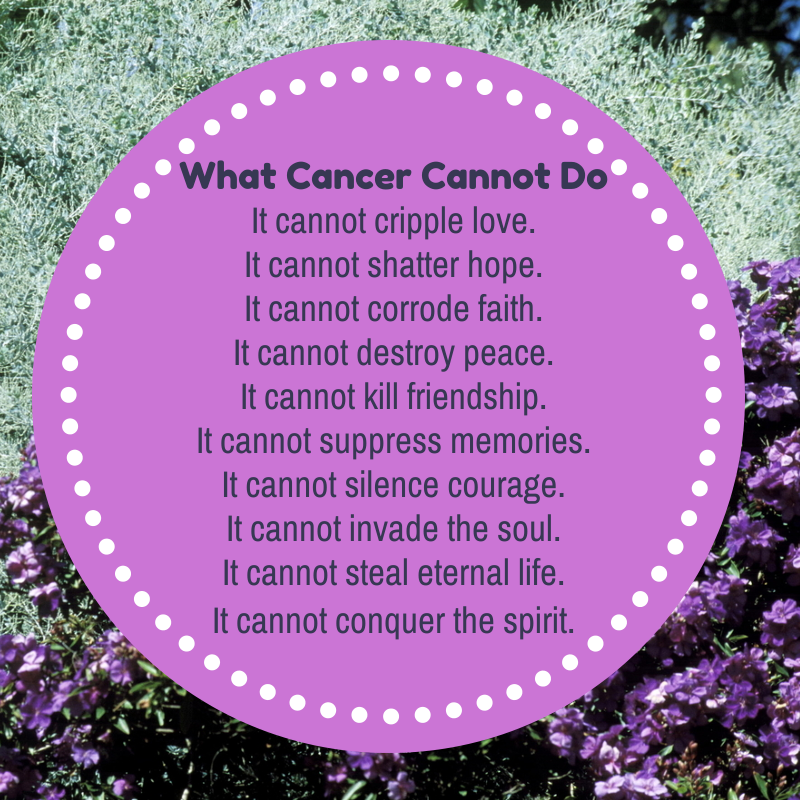 2 thoughts on “What Cancer Cannot Do”

28km of hillllllllz for breakfast today. SO thankful that @burlingtonsportsandspine has the @airrelax system! Seriously, these boots are a game-changer for recovery 🙌. And....... we love them so much that we are now an official supplier of their products! 🦵 🏃‍♀️ #recovery #runner #burlon #aroundthebay #hilltraining #aroundthebay30k
This was SUCH a thrill for me! Thank you @lisakearnsward2 for recognizing my run at @nycmarathon and my goal to inspire others to live their lives being physically active. 🏃‍♀️ #Repost @lisakearnsward2 with @get_repost ・・・ An honour to recognize the achievement of Ward 2 Resident 🌟 Dr. Ashley Worobec 🌟 for completing the 2019 NYC Marathon. Ashley took us all along for an inspirational journey of training and completing the esteemed NYC Marathon. Her advice that “you set a goal, chase your dream and you keep at it day after day,” shows us how we can keep active and healthy in our community. Please join me in extending congratulations to our Community Champion, role model, and local business owner in completing the largest marathon in the world!
As I cleaned through my old papers last week, I also came across this gem. This was taken in the Spring of 2008, a few months after opening my clinic and, shortly thereafter, finding out that I was pregnant. Life was about to change drastically, and I under-estimated how much mental energy it was going to take. Opening day was February 4th, 2008, and there were many days in those early months when the phones only rang a handful of times. I used to nap on the massage table in the back room to fight my first-trimester fatigue, while listening for the "ding" of the front door to wake me. We had a small but mighty staff of part-time practitioners, and my husband would work the reception desk on weekend mornings. I cleaned the clinic, washed the windows, did the accounting, laundered the linens at home, and spent long days at the clinic building my business. Twelve years later, I'm thankful for those struggles that taught me so much about myself and my capabilities. #bellletstalk Day was not only a chance to spread mental health awareness and support, it also provided a good chance for reflection, don'tcha think? We can do hard things. #burlon #chiropractor #sportsinjury #selfreflection #mentalhealth
She’s camera shy. 📷 I had blocked off the first hour of my workday today to meet with a dear friend for coffee. Life is so busy, that this coffee date was booked weeks ago; but unfortunately her son woke up sick so she had to cancel. I found myself with some free time and I seized it. 🐶 There’s not much I love more than running with my dog. Today we squeezed in just over 5k, a lot of it along the lake, and it was a good reminder to me of how simple things can bring such joy. As a Type A goal-setter, I often struggle to see the forest for the trees; today I SLOWED DOWN and appreciated the little things. 😊 Now I’ve got sweaty hair and smudged eye makeup, but I’m oh-so-HAPPY! Happy Wednesday my friends. #burlon #dog #fitness #runner