The sweetest moment happened to me in the early hours of Sunday morning.  Two days later, it’s still making me smile, so I want to share it here with you.

I had my alarm set to wake me at 6:30am, wanting to get in a run before the rest of my household was up, so as not to miss precious weekend family time.  In my mind, I was planning for a fast 8km, much of it at tempo pace, as I’m doing a 5K race on Friday and haven’t tested much speed since my shortened half marathon four weeks ago.  I was looking forward to the glassy lake, music in my earbuds, and to feel the burn in my lungs.  This run had been scheduled into my online calendar many days prior, and as I often do before a run, I had visualized my route and mentally prepared for the welcomed discomfort that a hard effort brings.

My alarm beeped softly, and sunlight was already streaming into the bedroom, a nice change from the cold, dark Winter pre-dawn runs only a few months prior.  My four-year-old daughter was snuggled up against me; as I’ve mentioned before, since our move last September she’s taken to crawling into our bed halfway through the night- something I cherish and know won’t last forever.  As I snuck out from underneath her embrace, her sleepy eyes started to open.  “Where are you going?” she whispered.  “I’m going for a run,” I replied. “Go back to sleep, it’s too early to get up.”

Now, she often stirs when I head to the gym at 5:30am and a simple “go back to sleep” puts her right back into dreamland.  But this time, her eyes welled up and as she laid back down I could see her little mouth turning into a soft whimper.  She began to suck on her fingers for comfort, something she’s done since she was a newborn.  She was crying because I was leaving.  My heart broke.

“Do you want to come with me?” I asked. “Yes,” she nodded and pulled back the covers, her bedhead on full display and her little body still warm from slumber.  In less than five minutes we were out the door, with a Chariot full of breakfast snacks and a little girl in pyjamas.  It was a sunny Summer morning, and because we were so early, we got to enjoy quiet streets and sleepy houses, with bunnies and robins abound.

I changed my run plan from push-the-pace to savour-this-moment, and savour it I did.  We did that 8km along the lake, as I had originally planned (and we got the glassy lake that I love so much), but my heart rate stayed low and my heartstrings pulled high.  I stopped to open snack containers, to play at the park, and to point out the geese and the paddleboarders.  We talked about every thought that popped into her head, every bike that rode by, and every seemingly-mundane thing that fascinates a four-year-old.  It was quite possibly the best run I’ve ever had, and my runner’s high is still going.

Running with my kids is not new- there are thousands of miles on my running stroller I’m sure, and they are both very used to joining me.  But this time was different because our family is at such a time of transition.  You see, this smart, inquisitive little girl is heading to full-time Kindergarten in September, and I’m having a hard time with it (see my previous post on the topic).  She’s growing up and gaining independence, and the days of me pushing her in the running stroller, the days of her sobbing to join me on a run, and the days of her sleeping beside me are numbered.  I’m hyper-aware of this the second time around.

Have I mentioned that I’m an emotional sort?  Add in life changes, my children, running, and a glassy lake, and I’m done for.  But my tears were happy ones, they are happy ones; it’s just that sometimes the love and gratitude overwhelm me.

So if you saw a crying mother and a chatty little girl zipping along the lakefront on Sunday, that was us.  “Run fast Mommy,” she said.

I will, sweet girl.  Come with me. 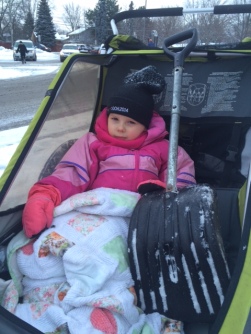 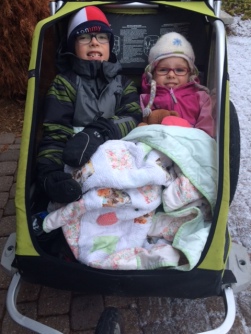