This is how Dictionary.com defines ‘princess’:

Numbers 1-4 do not apply to my daughter.  Those points are easy to argue.  It’s #5 that has me concerned.

Yep, she’s cute.  And yep, she’s only 18 months old.  Perhaps I’m making a bigger deal out of this than needs to be made.  In fact, if I am being completely honest, I have called her “princess” on occasion myself.  However, we were at an indoor playplace one morning last week, and sweet little Casey toddled towards one of the dads playing with his children- the first words out of his mouth were “hi, princess”.  He didn’t choose to just say “hi”, “hello”, or even “hi sweetie”, which is what I call most toddlers I encounter.  He chose “princess”.  If she had been a boy, would he have chosen “prince”?  I doubt it.  I think he would’ve chosen “buddy”, or “bud”, or “big guy”.  “Buddy”, “bud”, and “big guy” all convey images of camaraderie, strength, and confidence.

Meanwhile, Google informs me that the “qualities and characteristics of a princess” include nobility, poise, dignity, listening attentively, controlling her emotions, selflessness, generosity, compassion, patience, and forgiveness.  And here’s the kicker: “A princess doesn’t compete with a prince.  Just the opposite, she builds him up”.  Wow.  Not exactly conveying camaraderie, strength, and confidence.  Girls are praised for their looks and boys are praised for their character.  It starts early, folks.  Are we teaching our daughters to be confident, self-assured, independent young women, or are we teaching them to find their prince and build him up?  I’m trying to raise my little girl to be a kind person, just as I’m trying to raise my little boy to be a kind person.  The stereotypical, gender-role, accepted-female-behaviour-versus-accepted-male-behaviour has got to stop.

The reality is, she will likely be told she’s cute many more times in her life than she’s told that she’s smart.  Or that she’s strong.  Or that she’s kind.  Her cuteness is the tip of the great big iceberg personality that lies beneath.

Like I said initially, perhaps I am reading into this too much.  Perhaps I am creating worry where no worry needs to be.  But, then again, perhaps it all starts with “princess”. 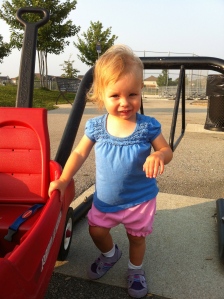 I love this kid!